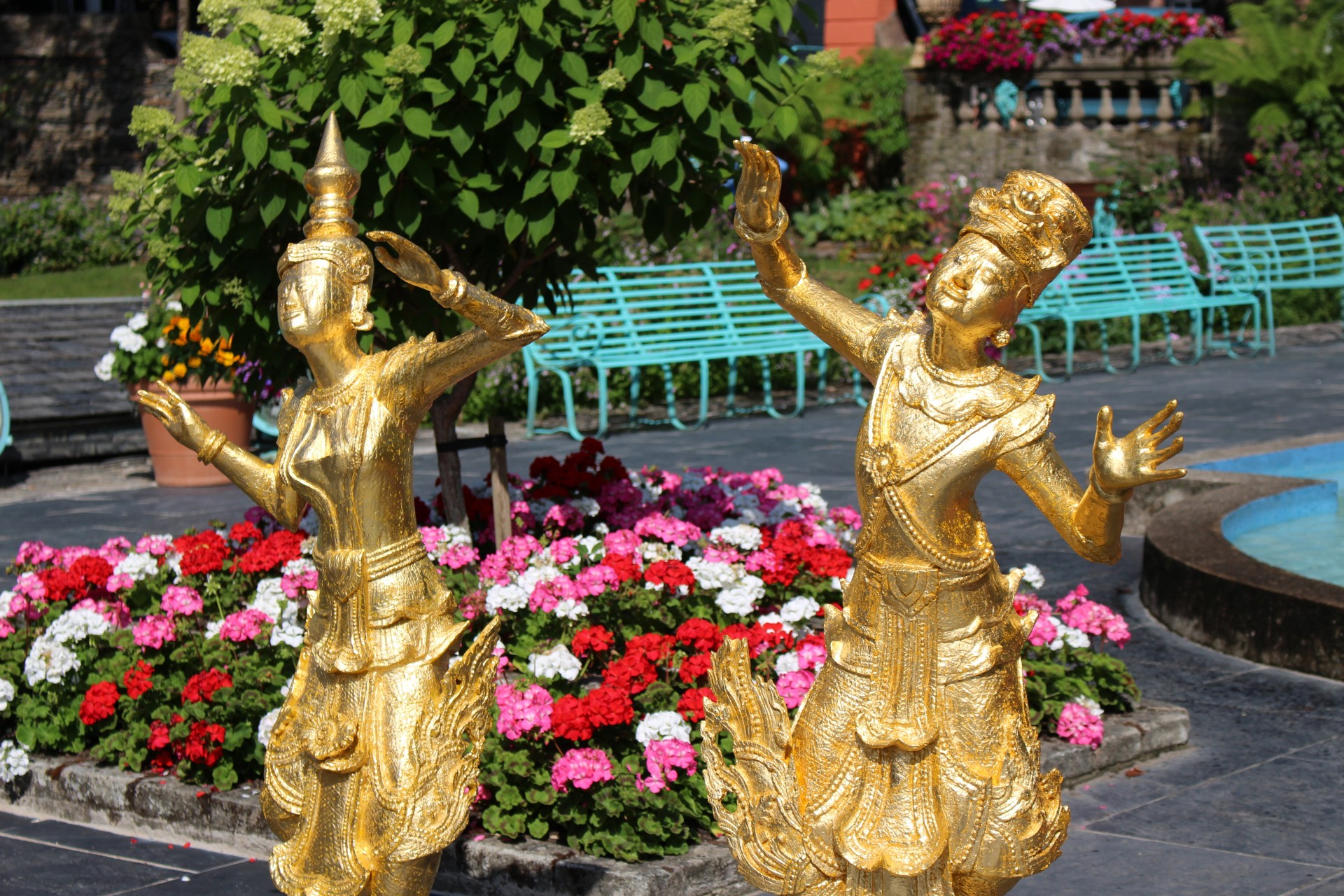 We are pleased to announce that the Burmese Dancers have returned to Portmeirion.

The Burmese Dancers are a pair of statues carved from lacquered wood and gilded in gold leaf. They are associated with the 19th-century court arts of Mandalay, Burma, marked by flamboyant costume details. But how did two Burmese dancing statues find their way to an Italianate village on the coast of Snowdonia?

It is a bit of a mystery as to how and when they arrived at Portmeirion. Pictures dating to the late 1950s show the statues overlooking the Fish Pond before being moved to the Central Piazza in the early 1960s. This has led some Portmeirion historians to speculate that the statues could’ve been remnants from the filming of The Inn of the Sixth Happiness in 1958.

Other theories include that Sir Clough Williams-Ellis, the visionary architect behind Portmeirion, acquired the statues from a salvage yard in London. Williams-Ellis often referred to the site as “a home for fallen buildings”, and his eclectic style has resulted in a broad collection of architectural pieces throughout the village. His daughter and the founder of Portmeirion Pottery, Susan Williams-Ellis, was inspired by the exotic and had a fascination with eastern art, as is evidenced in some of her sketches. Some Portmeirion experts believe she could be the reason the statues found their way to their current home.

Whatever brought the statues to Portmeirion, they have come to be a much-loved feature of the Central Piazza. The statues were removed from their large stone columns in 2017, due to poor condition. In need of much repair, Nigel Simmons, the sculptor for Portmeirion, was tasked with reviving both the male and female dancing statues.

Simmons started the process in February 2018 by cleaning the original statues and filling in missing and broken pieces with wax before casting each section of the statue in silicone rubber. Nigel used a series of photographs of the original statues to piece together some of the missing elements including headdress, hands and even the back of one of the dancers’ heads.

Next, Simmons put a plaster peris coating on each silicone section before casting it in glass fibre. Each glass fibre section was then fit together before being coated in gold leaf. The project has taken 6 months to complete.

The original statues will remain in storage and be looked after by Portmeirion’s Collections Manager, while the new statues take pride of place in the centre of the legendary village.